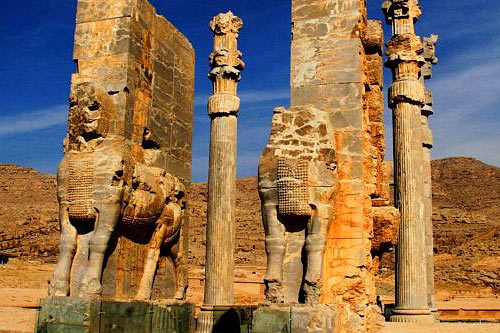 UNESCO/ United Nations Educational, Scientific and Cultural Organization World Heritage Sites are places of importance to cultural or natural heritage. Iran accepted the UNESCO Convention on 26 February 1975, as, on 2019, twenty-four sites in Iran were included:

Located in the East Azerbaijan province, it is an ensemble of three Armenian churches established between 7th and 14th centuries A.D. Since then these three edifices with a total area of 129 hectares have experienced many renovations.

As the largest adobe building in the world, it is located in Bam, Kerman Province. The entire building was a large fortress containing a citadel, and because of its impressive look the fortress is named the Bam Citadel.The origin of this enormous citadel on the Silk Road can be traced back to the Achaemenid Empire (sixth to fourth centuries BC) and even beyond.

Meaning “the place of god”, it is a multilingual inscription and large rock relief on a cliff at Mount Behistun in Kermanshah Province, established by Darius the Great (r. 522–486 BC). This approximately 15 X 25 X 100 m (330 ft)relief is up on a limestone cliff of an ancient road which connects the capitals of Babylon and Ecbatana.

A village in Meymand Rural District, in Shahr-e Babak, Kerman, with a 673 population, in 181 families (the 2006 census). As a primary human residence in the Iranian Plateau, it dates back to 12,000 years ago; Many residents of which, live in the 350 hand-dug houses amid the rocks.
In 2005, Meymand was awarded the UNESCO-Greece Melina Mercouri International Prize for the Safeguarding and Management of Cultural Landscapes (about $20,000).

A masterpiece monument in Gonbad-e Qabus, marking the grave of Ziyarid ruler Qabus (r. 978–1012), it was built during his lifetime. With a 61-meter cylindrical tomb tower, it can be seen from some 30 kilometers (19 miles) away.

The former royal Qajar complex in Tehran and one of the oldest historic monuments of the city, it consists of gardens, royal buildings, and collections of Iranian Crafts and European Presents from 18th and 19th centuries.

It is a large salt desert located in the provinces of Kerman and Sistan and Baluchestan, with a temperature of 70 °C (159 °F), which makes it one of the world’s driest and hottest places.

Capital of Firuz Abad County, Fars Province, south of Shiraz and surrounded by a mud wall and ditch, with 58,210 population in 12,888 families (2006). When the original ancient city of Gor (Achaemenid period) was destroyed by Alexander the Great, centuries later Ardashir I, revived the city before it was ransacked during the Arab Muslim invasion (seventh century). After once more getting revived by the Buyids, eventually Qajar Dynasty abandoned and replaced it by a nearby town, which is now Firuz Abad.

The present congregational mosque of Isfahan, that is the result of a line of chained construction, reconstruction, additions and renovations from around 771 to the end of the 20th century.

A square situated at the center of Isfahan, which was constructed between 1598 and 1629. By an area of 89,600 square meters, the square is surrounded by buildings from the Safavid era: Shah Mosque on the south side, Ali Qapu Palace on the west side, Sheikh Lotf Allah Mosque on the eastern side and at the northern side Qeysarie Gate which opens into the Isfahan Grand Bazaar.

The capital of the Achaemenid Empire under Cyrus the Great (559–530 BCE), who ordered its construction, about 90 kilometers (56 mi) northeast of Shiraz. The limestone tomb there is believed to be that of Cyrus the Great.

An archaeological site of Bronze Age, associated with the Jiroft culture. Located in Sistan and Baluchistan Province, it is on the bank of the Helmand River, near the Zahedan-Zabol road.
Though the reasons for the unexpected rise and fall of the city are still unknown, artifacts recovered from the city demonstrate a peculiar incongruity with then nearby cities.

It is the tomb of Sheikh Safi-al-din Ardabili located in Ardabil. Sheikh Safi, an eminent leader of Sufi born in Ardabil; whose tomb was established by the Safavids there.

It is an irrigation system of Shushtar City (Sassanid era), in Khuzestan Province, including water mills, dams, tunnels, and canals. Parts of the irrigation system are said dates back to the time of Darius the Great, (Achaemenids), and partly it consists of a pair of primary diversion canals in the Karun River; one of which is still in use today, delivering water to Shushtar City.

An ancient city of the Sasanid empire, and one of the most important cities of the Ancient Near East, locating in the lower Zagros Mountains, it now “consists of three gigantic mounds. Occupying a one-square-kilometer area, it is known as the Apadana Mound, the Acropolis Mound, and the Ville Royale/ royal town mound. The modern Shush is located on the site of ancient Susa, identified as Shushan and mentioned in the Book of Esther and other Biblical books.

A historical market on the city center of Tabriz, one of the oldest bazaars in the Middle East and the largest covered bazaar of the world.

It is an archaeological site in West Azarbaijan, remained from Sasanian Empire.
A fortified site, located on a hill created by the outflow of a calcium-rich spring pond, includes the remains of a Zoroastrian fire temple of Sassanid period and partially rebuilt during the Ilkhanid period.

An ancient Elamite complex in Khuzestan Province, it is one of the few existing ziggurats outside Mesopotamia, laying 80 km (50 mi) north of Ahvaz.

They have influenced the design of gardens from Andalusia to India and beyond, for instance Humayun’s Tomb and Taj Mahal (Mughal Empire in India).

This is an underground aqueduct, to transport water from a water well to surface for irrigation and drinking. The qanats still create a reliable supply of water for human settlements and irrigation in hot, arid, and semi-arid climates; though the value of this system is directly related to the quality, volume, and regularity of the water flow.

The capital of Yazd Province, located 270 km (170 mi) southeast of Esfahan that since 2017, it was recognized as a World Heritage Site by UNESCO. In addition to its unique Persian architecture, it is also very well known for its Zoroastrian fire temples, ab anbars/ cisterns, qanats, yakhchals, Persian Handicrafts, handwoven cloth/ termeh, silk weaving, and its confectioneries.

It is an area of Mountainous Forests and lush lowlands, with an area of 55,000 sq. km, near the southern shores of the Caspian Sea.