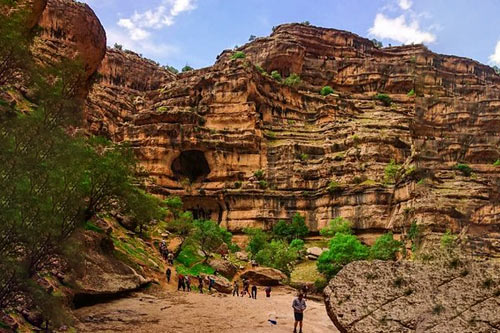 A province of western Iran in the Zagros Mountains, with a population of around 1,716,527 people (2006), Lorestan covers an area of 28,392 km2. Stretched along the Zagros mountain range and veiled with wheat fields and oak trees, Lorestan contains rare mountains, mysterious canyons and eye-catching waterfalls, to justify its visitors what are the causes of its fame.

With an average breadth of 150–180 km, Lorestan/ Lurs Land consists of that part of western Iran that coincides with Ilam Province, and then extends for about 650 km from northwest to southeast; i.e. from Kermanshah to Fars. Its highest and the lowest areas are respectively Oshtoran Kuh Peak by 4,050 m and the southernmost sector of the province by 500 m heights.

Generally, climate here is low-humid continental with just winter precipitation, in snow form. Thanks to its situation on the westernmost slopes of the Zagros Mountains, compared to other spots of south Alborz Mountains, Lorestan’s annual Precipitation is the highest.

As the capital of Lorestan Province, it is populated mainly by Lurs and Laks, with the two ethnicities closely related. It has a temperate climate with heavy rainfall particularly in Spring and Winter which considerably forms numerous underground water resources and springs for the city.
Among all attractions of Lorestsn, Falak-ol Aflak is the most famous one:

Standing on a stone hill and near Khorram Rud River, it dominates Khorramabad. As the symbol of Khorramabad, the structure (300 X 400 m) was built around 1800 years ago and has been a matter of consideration through the ages. With a 5,300-square-meter area, it stands 40 meters higher than ground level.

Located near Kuhdasht City in Lorestan, it is placed at the intersection of the three provinces of Kermanshah, Ilam and Lorestan.The integrated collection of the rough and sharp rocks beside the trees, created a fabulous space, quite unique and exotic. Added to springs with their variety of sizes, there are spectacular sights and attractions at the heart of this spot:
• Ashiane-ye Parandegan/ Bird Nest: Stones and sharp rocks, some of them belonging to ancient times, which their small holes at the moment made them a safe nest for birds.
• Pole-Khoda (God’s Bridge): A cave with 150 meters length, through which a river pass. The water comes from a place called Neyzeh/ spear to go inside the cave and occupy the same route, one should walk through to enter the cave of stalactites and the other wonders.
• Manareh Sangi/ Rocky Minarets: Created by nature during a course of millions of years, it has 80 meters height with a 10-meter diameter.

on the midway of Pol Dokhtar- Andimeshk Road, in western Iran, this valley is next to a village by the same name. The valley’s marvelous face is due to both the natural drawings on the walls and the passing of Karkheh River through it. Yet, one of its main attractions is a bridge measuring 112 X 85 meters, Which is the highest suspended one in Iran and Middle East.

It is one of the major tourist centers of Borujerd in terms of its rich sources, that contains volcanic rocks and wild rare plant species, all owed to the spot’s particular position.Chogha Hill, contains many facilities such as Zagros international four-star hotels, an artificial lake, waterfall, fountain, …

Located in the Khorramabad County, joining to the Sezar River, it has a 48-meter height and a 10-meter wideness.

A natural lake in northwest of Khorramabad in Lorestan which covers a seven-hectare area with a 3-7-meter depth.There is also an amusement park as well as other recreational facilities next to the lake.

As a meltwater lake located beside Oshtoran Kuh in Zagross Range in Lorestan, it provides Oshtoran Kuh with ice and snow.Placed 2360m above the sea level, it has 1700m long, 500m wide and 28m depth.

Ab sefid waterfall placed under the shadows of the Zagros Mountains, comes out of the heart of the cliffs. Located southeast of the province on the slope of Zagros Mountains, it is beside the high mountain of Ghali Kuh in the district of Zalghi in the city of Ali Gudarz.It goes through a tunnel at the heart of a rocky mountain (69 m high) and by an amazing exit comes out of it. Then joining the river of Rudbar (Ab Zalaki) in Lorestan, it eventually pours into Dez River.

Covering an area of 914 hectares, it is located 8 kilometers southeast of Borujerd. This wetland is home to migratory birds as well as animals such as snake, duck, turtle, heron, wolf, jackal and beaver.

Located on the top of the Taff Mountains with many medicinal herbs, it attracts lots of people and tourists annually. It is one of the highest waterfalls in Iran, located 38 kilometres (24 mi) southeast of in Khorramabad County in Lorestan Province, west of Iran. With 95 meters height (312 ft) and 5 meters (16 ft)width, this Waterfall was registered on the Natural Heritage list by Cultural Heritage, Handicrafts and Tourism Organization of Iran on 27 March 2008.

Also known as Sarkaneh or Haft Cheshmeh, it is a waterfall in Khorramabad, at the Village of Sarkaneh Abbas Abad in Lorestan Province.With 15 meters height and 17 meters wide, it is surrounded by several locations covered with oak, vine, and hawthorn trees. Gerit Waterfall is the 75th national natural waterfall, registered in the list of natural heritage in October 2009 by the Cultural Heritage Organization of Iran.

It is a cylindrical construction made of stone and ‘Saruj’, containing several springs and located near the prehistoric Qomri Cave.It was once used to run the water-mills; the remnants of which can be seen in the vicinity of the valley of Khorramabad, right on the location of the ancient city of Shapurkhast.Dating back to Sassanid period, this structure with an 18-meter diameter rises to 10.3 meters above ground level. Gerdab Sangi was registered on the National Heritage List in 1976.

Undoubtedly as one of the most spectacular waterfalls in Iran, this pretty waterfall consisting of several fountains, creates a magnificent image before the eyes of any traveler. Standing about 48 meters above ground level, with 20 meters wide and 10 meters long, the waterfall eventually pours into the Sezar River.