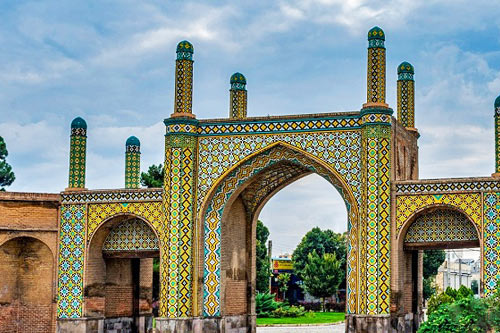 The largest city and capital of Qazvin Province and the medieval capital of the Safavid dynasty for over forty years (1555-1598), it is known as the calligraphy capital of Iran. The city is famous for its Baghlava, carpet patterns, poets, political newspaper and Pahlavi influence on its accent.The majority of Qazvin People’s major language is Persian with a Qazvini Accent. Azerbaijanis and Tats are the other ethnic groups of Qazvin, both of whom, speak Azerbaijani and Tati.

The province neighbored with Mazandaran and Gilan (north), Hamedan and Zanjan (west), Markazi (south) and Tehran Provinces (east), occupies a 15821 km² area. Considering the location of Qazvin, this city has been a transit point to connect the center and the west parts of Iran. Due to this same strategic location, the Safavid dynasty choose it as the capital of Iran. The city includes several famous mountains, that all of them belong to central chain of Alborz; while Sialan with 4175m and Shah Alborz with 4056m altitudes are the highest ones.

There are plenty of Tourist Attractions inside and outside the ancient city; some of which are historic and some are natural spots. Continue reading this article to know more about them:

Built during the Qajar era, it is one of Persia’s best preserved urban caravanserais.The site was named after its builder, whom was Sa’ad al-Saltaneh Isfahani. This caravanserai, built on a square plan, has 4 ivans that are facing a courtyard. All the interiors of the site are decorated with Muqarnas and Rasmi Bandi.

It is one of the oldest mosques in Iran, and the congregational mosque of Qazvin; with its oldest part constructed by the orders of Harun al-Rashid (807CE). Yet its main double-layered dome is from the Seljuk era, and locked to the public. With some renovations carried out on many sections, the mosque contains some precious examples of relief calligraphy from medieval times.

Placed on an interesting pavilion in the old Qazvin, this monument is considered as only building left from royal palaces of Shah Tahmaseb.With a two-storey octagonal building, it covers an area of about 500 square meters.A beautiful porch with brick pillars and semicircular arches surrounds the monument with another porch carried by wooden pillars located above it.

The church was built in 1905 for the Russians engineers, whom were hired for road constructions in Qazvin. The entrance part, surrounded by two walls that are adorned with crosses, contains a three-storey bell-house with a small dome confining it. The hall includes a chapel and altar, with two rectangular areas on both sides. The brick altar that in the shape of a half circle covers the dome, has an irregular polygon form. The paved churchyard leading to many tombs, contains a memorial to a Russian road engineer.

Alamut, the most famous of once stronghold assumed to be impregnable before any military attack, was contained of its rare gardens, library, and laboratories where philosophers, scientists, and theologians could debate in an intellectual free space. In 1256, through Mongols invasion, its famous holdings of library were destroyed. That’s why this period’s sources on the history and thought of the Ismailis are lacked. Though this ancient fortress is ruined, it has enough mysteries to be a nice tourist destination.

During the reign of Naser al-Din Shah it was built by the order of Sa’d al-Saltaneh. As the present biggest urban caravanserai complex in Qazvin, this historical site with a nice beautiful area, contains so many spots to demonstrate: bathrooms, saray, arcade, shotor khan, chahar souq, Rasteh, mosque, tea house, … On August 2, 2005, it was registered under the name of Sa’d al-Saltaneh.

Also known as ‘Bell Tower’, it was built by Russians in Qazvin, when in Second World War they conquered Iran. This small church contains an altar facing the east and a bell tower of about eleven meters height. With an irregular polygon form, Cantor Church made up of the red and glazed bricks with decorative geometrical shapes, contains a few graves of Russians in its yard.

It is one of the oldest gates of Qazvin town which used to be the gate to Alamout, Roudbar, Koushks and northern hunting ground of Qazvin. It is an arched semicircular shape, with two arcades built on each side of the corridor that softly coming out, they remind the open arms status ready for a warmly receipt of the new comers. The facade tiled by using the Rasmi Bandi form, with only one view towards the suburban areas, was done in the ruling time of Azed Al-Mulk Qajar.

The tomb of a writer and historian at the Ilkhanate era, whose precious works have preserved his fame during decades.The main site is located in a cellar, underneath a building which is an octagonal-shaped dome, decorated with Muqarnas in all surrounding parts. The azure dome and the cerulean inscription written in Thuluth Form introduces Mostofi’s ancestors and his works. In February 9th, 1940, the site was registered as one of the national relics of Iran.

Niaq Village, located 17 kilometers North of Qazvin is one of the important grapes-cultivator centers of the province. In this village, there is a relatively high rock in which large cavities have been created by natural factors; inside some of which, there are rectangular ponds dug by residents that become filled through rainfalls. It is said that Muhammad Hanifeh had built a palace upon this site; of which nothing is left but some pieces of pottery.