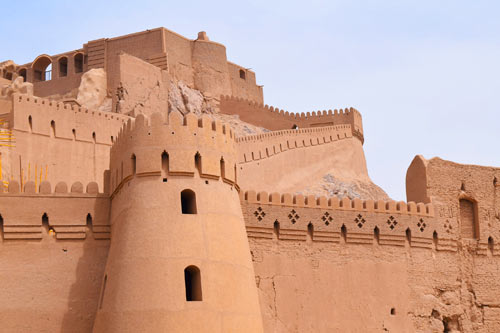 Kerman city (the capital of Kerman Province) according to the 2011 census had a population of 821,394 people, in 221,389 households, which had made it the 10th most populous city of Iran.
As the largest and most developed city in Kerman Province and the most important city in the southeast of Iran, Kerman is famous for its long history and strong cultural heritage.

Located on a high margin of Kavir-e Lut/ Lut Desert in the south-central part of Iran, the city is surrounded amid mountains. With a 1,755-meter (5,758 ft) height, it is the third elevated city among provincial capitals in Iran.

Kerman has a cold desert climate with hot summers and cold winters plus a few Precipitation throughout the year.
Being surrounded by mountains, gives variety to Kerman’s climate, with the northern part located in an arid desert area, and highlands of the southern part enjoying a more moderate climate. With the average elevation of about 1,755 m (5,758 ft) above sea level, this region’s mean rainfall is 142 mm annually.

This desert city has many great spots worth visiting, each with a great rich history on behind. Here, we go through some of them:

Meaning the Prince’s Garden, it is a historical site located near Mahan in Kerman.
As a fine typical of Persian gardens, this 5.5 hectares rectangular garden, is protected among walls; In June 2011,.Mahan Garden was registered on the UNESCO World Heritage Sites.

Though the building itself is made up of stone and gypsum, the dome is stone and brick- made.
With an octagonal design, it is three- floored, crowned by a rather flat dome. The structure’s Stoney Façade is impressive, so much as that of Sassanid Period.

He was a Persian Sufi Master and a poet of 14th and 15th centuries, revered as a saint specially by Sunni people.His Shrine is a historical complex and a pilgrimage site, located in Mahan, containing the mausoleum of Shah Ni’matollah Vali.

An adobe castle 100 Kilometers south of Kerman province, it is situated on the skirts of the Hazar Mountain. The mudbrick city of Rayen (medieval) is similar to Arg-e Bam, which was destroyed in in December 2003 by an earthquake.According to the old documents, the Castle situated on the trade route, was both a center for trading valuable goods and also a center of manufacturing sword, knife later on, guns. Due to its situation on the Hazar Mountain with 4501 meters altitude and a waterfall at hand, this spot is green and thriving: it is rich by many fruit gardens; the mines of green and pink marble and sodium sulphate; several thermal springs, and so, an attractive touristic destination.

Kerman’s Grand Bazaar is one of the oldest ones in Iran. With a classic vaulted ceiling, it is 1.5 kilometers in length, and comprising of various rows or alleys; each one of which carries a separate name. Every part of this bazaar had been constructed during the rules of one of the commander or rulers in this territory.

It is the first anthropological museum of the Zoroastrians of the world, with a construction completed within one decade (1370-1380). This museum is comprised of different sections, each in charge to show one of the customs of Zoroastrians.

It is located in the center of Bardsir, opposite of the Jame Mosque, with 2300 square meters area and an 8-meter height. Existing for more than 300 years, its various spaces are: a courtyard with four porches and eight entrances, as well as other residential facilities such as kitchen and the system of water supply. This whole verify that Arg-e Bardsir once was the right place to live in as a military castle.

Believed to be one of the most beautiful gardens in Persia, Fath Abad Garden until recently suffered years of neglect; though it is now considered as an important historical place remnant of the Qajar period (constructed in 1870), with a reputation owed to its long reflection pond and ornate architecture.At the moment, this spot is surrounded by pistachio gardens and best visiting time of it is around sunset when the beautiful night illuminations over it will make you amazed.

A UNESCO World Heritage Site, just 30 minutes south of Kerman, Shazdeh Mahan Garden stood up beautifully like a piece of gem amid an arid-desert, houses a glorious garden with tall trees and fresh water flowing straightly from the mountain.

In ancient Iran, the squares like this used to be places for gatherings and ceremonies. The Ganj Ali Square, so similar to Naqsh-e Jahan Square in Isfahan and Mir Chakhmagh Square in Yazd, is surrounded by urban elements such as bazaars, Caravanserais and schools:

• Ganj Ali Khan Bathhouse
Built in 1631, it is located on the southern side of Ganj Ali Square, with the entrances spots painted and ornamented ( from Safavid era). Composed of a locker room, cold room and hot room, the building is a unique work of architecture decorated with exquisite tile works, paintings, stuccos, and arches. This bathhouse was later converted into an anthropological museum (1971). In the closet section and main yard of the bath there are many lifelike statues; all of which were made at Tehran University’s faculty of fine arts in 1973 and then transferred to this museum.

• Ganj Ali Khan Bazaar
It is located in southern part of Ganj Ali Square; the Interior section of which is decorated with exquisite plasterwork and wall paintings. The bazaar with a 93-meter length, is connected to Ganj Ali square by 16 ivans and vaults.

• Ganj Ali Khan Caravanserai and Mosque
Based on the four-ivaned form, with double-storied halls centered on tall ivans, the caravanserai is located on the east side of Ganj Ali Square, with a plan completed by an octagonal fountain placed at the center of the courtyard. Also, the portal of this structure bears a worthwhile inscription from 1598 written by calligrapher Alireza Abbasi.

• Ganj Ali Khan Mint/ Bank
The mint’s construction started in 1598 and ended in 1625; the interior decoration of which, consists of ochre plasterwork and brickwork. The building has a tall dome and a vaulted roof to admit light in and vent the air out. This mint was later converted into a numismatics museum in 1970, to display coins from different periods such as Parthian, Sassanid, Safavid and Afsharid.