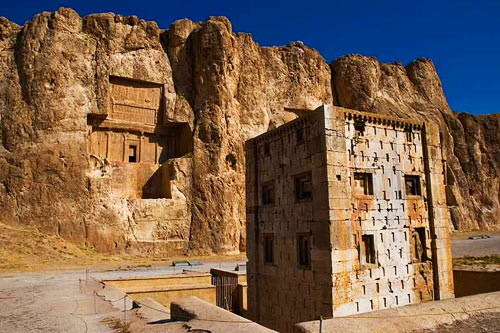 An impressive necropolis standing about 12 km northwest of Persepolis, in Fars Province which reminds us the famous and powerful Achaemenid Empire of Persia. Standing a few hundred meters from Naqsh-e Rajab with a further four Sassanid rock reliefs, it is the remainder of Achaemenid Rulers, containing a group of ancient Iranian Rock Tombs. This sufficiently qualified remainder of the Achaemenid Dynasty (c. 550–330 BC), which shows off a good sample of great architectural decorations, contains four large tombs carved on the cliff surface. From among these four tombs just one has been identified with certainty as “the great Persian king, Darius I”.Archaeologists believe the other three kings buried here are: Xerxes I, Artaxerxes I, and Darius II. These tombs’ facades also bear large panels over the doorways, each with figures of the king being invested by a god, above a zone with rows of smaller figures carrying gifts, along with soldiers and officials. At the necropolis also stands another building, aside from these tombs, which is called Ka’ba-ye Zartosht/ Zoroaster and considered as a replica of the Zendan-e Solayman/ Prison of Solomon in Pasargadae. It is assumed that it had a religious role, for the experts have reached no consensus upon another specific use of this structure. Right at the foot of Achaemenid tombs, near the ground level, a few rock reliefs are seen with large figures of Sassanid Kings; some of whom, are involved meeting gods and others in combat. Watching the way these reliefs are placed, declares that the Sassanid used to link themselves with the glories of the earlier Achaemenid Empire.

Though severely damaged, the oldest relief of Naqsh-e Rostam dates back to 1000 BC. It depicts a faint image of a man with unusual head-gear, which is thought to be an Elamite in origin. Later on, by the command of Bahram II, most of the larger mural that depiction is part of it, was removed. This same man with the unusual cap has given the site its name: Naqsh-e Rostam/ Rustam Relief; as, the locals believe it to be a depiction of the mythical hero Rustam (the key character of Firdausi’s Shah Name).

At a considerable height above the ground, four tombs belonging to Achaemenid Kings are carved on the rock face, that are so much resembled to the crosses, hence going under the name of “Persian Crosses” by locals. The entrances to tombs are at the center of these crosses, each cross with only one entrance; that open to a small chamber, where the king lays in a sarcophagus. The horizontal facade of each of the tombs is believed to be a replica of that of Persepolis’ Entrances. One of the tombs by an accompanying inscription, saying: “a Parsi, the son of a Parsi, an Aryan, of Aryan family”, is clearly identified to be the tomb of Darius I (c. 522-486 BC). The other three tombs are believed to be those of Xerxes I (c. 486-465 BC), Artaxerxes I (c. 465-424 BC), and Darius II (c. 423-404 BC) respectively. There’s also a fifth unfinished tomb there, that might be that of Artaxerxes III, who reigned at most for two years; though it is more likely to be that of Darius III (c. 336-330 BC), the last king of the Achaemenid Dynasts. On following years, upon the conquest of the Achaemenid Empire led by Alexander the Great, the tombs were looted.

An scholarly work, it is an inscription by Darius I from 490 BCE, which was placed on the top left corner of the facade of his tomb. The inscription mentions the conquests of Darius I and his various achievements during his life, that is assumed to be from his last decade of reign; it consists of four parts:
. Based on older monuments at Sar-e Pol-e Zahab, the large relief (5½ x 3 meters) depicts this scene: the king Darius’bow and lance carriers, Darius overlooking nine agents of conquered peoples while their necks tied, a tenth figure badly damaged laying under the king’s feet, and above these thirteen people an agent of Ahura Mazda, the supreme god.
.The panel underneath, with a cuneiform text in old Persian, telling the story of the king’s conquests
. Another panel telling almost the same story in Babylonian
. A third panel with the same text in Elamite, as the language of the Achaemenid Empire Agent

Some Parts of Inscription Text

The translation of the Behistun Inscription was made by L.W. King and R.C. Thompson; in which, Darius tells us how the supreme god Ahura Mazda chose him to dethrone the usurper Gaumata, how he set out to quell several revolts, and how he defeated his foreign enemies:

“A great god is Ahura Mazda, who created this earth, who created yonder sky, who created man, who created happiness for man, who made Darius king, one king of many, one lord of many.
I am Darius the great king, king of kings, king of countries containing all kinds of men, king in this great earth far and wide, son of Hystaspes, an Achaemenid, a Persian, son of a Persian, an Aryan, having Aryan lineage.”King Darius saying: “By the favor of Ahura Mazda these are the countries which I seized outside of Persia; I ruled over them; they bore tribute to me; they did what was said to them by me; they held my law firmly”, then names the countries one by one.
King Darius adds more: “Ahura Mazda, when he saw this earth in commotion, thereafter bestowed it upon me, made me king; I am king. By the favor of Ahura Mazda I put it down in its place; what I said to them, that they did, as was my desire.”
He then beautifully completes his words: “O man, that which is the command of Ahura Mazda, let this not seem repugnant to you; do not leave the right path; do not rise in rebellion!”