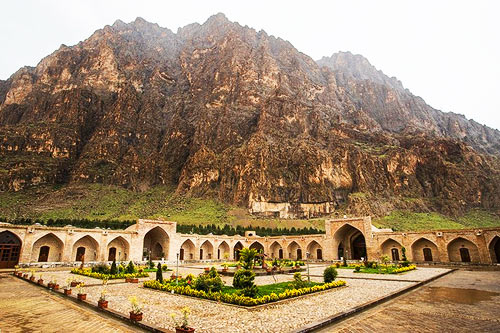 One of the 31 provinces of Iran (with Ilam Center), located in the western part of the country, which have 425 kilometers of borders with Iraq, Kermanshah, Lorestan, and Khuzestan. With 580,158 population (2016 census), this province is the least populous ones of Iran.

Covering an area of 20,150 km2 (4.1 percent of the country), thanks to Zagros Mountains, Ilam Province has a geological northwest-southeast axis. Being located on the end of this mountain’s west part gives the province its special landscape, with two distinct type of terrains:
• Mountainous areas; consisting of about 70% of the province that are parallel mountain ranges, highlands and folds.
• Low Desert areas; consisting the rest of the province, like the western areas of Mehran and Dehloran.

Thanks to the geography of the province, this region has a varied climate:
• The deserts of south (extremely dry and hot with low annual precipitations)
• The mountainous regions of east (rather mild with higher precipitations, mostly in form of rain), like Abdanan and Darreh Shahr
• The areas of northern parts of Ilam and Eyvan (cold winters and mild summers, with highest amount of precipitation)
This same variety of terrains is one of the main reasons why nomads nestle in this area.

Compared to other parts of Iran, and thanks to its being unknown, the tourist attractions of Ilam province are more pristine and tranquil; with its sights being especially attractive and popular destinations for summer travel.Renowned as Zagros’Bride, Ilam is a collection; wherein the nature and many monuments made the province a ground for better attraction of tourists throughout the year:

One of the most interesting spots near the city Dehloran is a natural liquid tar spring. With a diameter of about 9 meters, the ongoing hot water full of liquid tar particles is all year-round dancing here. According to folklore myths, once Esfandiar, the Iranian Hero, killed a dragon; whose blood formed this tar spring. In those times (3000 years ago) using this material, Iranians made their ships and roofs waterproof.Located in the natural protected area of Abgarm, in addition to Tar Spring there are also several other mineral water springs, native trees, and caves.

It is one of the long ranges of Zagros Mountains near the border of Lorestan and Ilam Provinces. Along the Zagros Mountains on the Northwest-Southeast axis, Kabir Kuh stretches 175 km in length and 48–80 km in width, and makes a 9,500 km² area. Kabir Kuh Range consists of a large number of mountains; with Kan Seifi (3,050 m high) as its highest peak.

This non-touristic pristine mountain is a nice option for skilled mount climbers equipped with necessary equipment.Though here there are alternative opportunities for other people too; like camping and hiking in the neighboring forests. In a distance between the site and Manjel, there are great views of gardens and springs with a background of mountain at your hand; in which you can make the best photos and videos of your trip.

Known as one of the rarest natural phenomena of the country, and accidentally divided into two parts this twin lake is located in a village with the same name. Containing various natural and beautiful relics and considering its unique climate type, Ilam is one of tourist attractions of the country with many lovers all year round. The twin lake of Siah Gav with a global fame has been registered among the Natural Cultural Heritage Sites.

128 km south of Ilam, once it was a very large town and now reduced to ruins. This famous city of Sassanid Era, is also believed that once was Madaktu, an important city in the Anshan Province of Elamite Kingdom, with a population of about 74,000. The Elmite Kingdom had three important cities with Madaktu as one of them, bearing the role of an advanced post upon Mesopotamia.
In modern Darreh Shahr now, contrary to Kurdish as the main spoken language of the province, most of the people speak Laki and Luri.

Located on the Choqa Mirag Hill of Ilam, this castle was built about 100 years ago (Qajar period). With 2,500 square meters area, the construction is made of brick, gypsum and marble. This castle, renovated by The Cultural Heritage Organization, bears an inscription; on which the date of construction and the name of its architect are mentioned.

This is an inscription carved on a large stone, in a place with the same name. Located on a place 34 kilometers from Ilam, this carving carries some information about the history and the governors of Ilam.

This inscription is carved on the wall of a mountain in Gol Gol Village, 25 kilometers from Ilam. This 3000-year-old relic includes an Assyrian Soldier Engrave with a helmet, an arrow and a moon and a star above his head. Some sentences in cuneiform script are seen in the lower part of the inscription.
Falahati Palace.Right at the middle of a beautiful vast garden, this palace is situated. Carving engraved portal and columns, the structure belongs to Qajar Period.

Locating 30 kilometers southeast of Ilam on the domains of Shah Nakhjir Mountain, one of the extensions of Kabir Kuh, this ancient site is seen. According to archaeological studies, the discovered ruins belong to 2500-2600 BC. and 4600-4500 BC.

Located in a verdant environment in Ilam Town, the Sartaff Wwaterfall is one of the public promenades; by which annually thousands of tourists are absorbed.

Located 11 kilometers north of Ilam, this mountain is 2,473 meters high; from which the Abaftab and Abzanguan Rivers are branched and at end join the Manasht Kuh in the west and the Chamangir Kuh in the southeast.

Located 35 kilometers from Ilam in Sivan Heights on the road to Dareh Shahr, this cave contains a nice pond, hundreds of columns, several vestibules, halls, wells and a wonderful aggregate of stalactites and stalagmites. With some 12-meter halls and a pleasant air current, inside the cave is so cold with no evidence of life.

As one of the main recreational areas of the city, this beautiful charming forest park has a 4,000-ha area. The site also consists of different species of trees and rare birds like bittern.

There are the remainders of several water mills all over the province, with some of them yet in use; the most important of which, are: Qoba, Kazem Bege Tanour, Kolai, Chegavazneh, and several others.