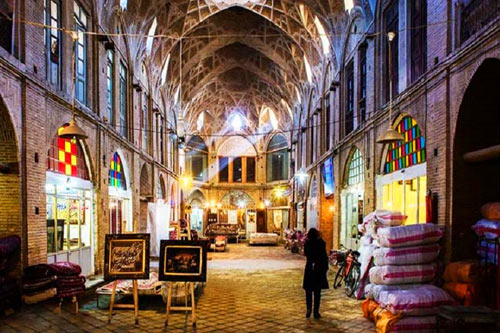 Regarding the attraction issue, this city is rich enough: naturally, historically, culturally and religiously; though, with respect to ecotourism and rural nomadic tourism the city has many potentialities, it is waiting to come to light. For a better familiarity, just a number of attractions are introduced here:

With an excellent capacity of water, it is located in the highest point of Mahallat City. Experts believe this same spring was the main core of Mahallat City’s Establishment. At the moment, this spring in a beautiful park, is surrounded by nice fountains, huge cedar trees, and rocky heights, which annually attract so many people.

It is located near the Nimvor Fire Temple Village (Sisanid Period); the structure of which consisted of cylindrical stony columns, covered chambers and a porch (for fire). This fire-temple is placed in a verdant spot; close to which, there is an archaic plane tree with other such trees arisen from its roots, reaching to a majestic height.

Khurheh is a village in Khurheh Rural District, in Mahallat County, with 627 population in 224 families (2006 census). The village is located 12 miles (19 km) north of Mahallat, with historical buildings belonging to Parthian Period. First excavated by Naser al-Din Shah Qajar, with treasure searching’s aims, it has an inscription on a rock, dating back to Seljuq Empire. The historical site of Khorheh is one of the great monuments of ancient Iran, remained from the Parthian Period.

Situated in Markazi Province, this is a limestone cave with an approximate age of 70 million years. Consisting of an interior section made up of crystals, dolomite sediments, and stalagmites, it was discovered in 1989 and registered as a national monument in 2001.Parts of the cave including its internal lake have been prepared for better access of the tourists.

With an area of 25 thousand hectares, it is one of the greatest wetlands in Arak. Desert Nature here has created a fabulous view, comparable with nowhere else. Dating back to the Paleocene Era, Meighan Wetland is the habitat of some of the rare migratory birds in Iran; hence considered as one of the marvelous natural attractions for birdwatching and also the top ten wetland of Iran.
Due to the salinity of water, salt dome covers the Meighan Wetland during the winter, with a white and snowy face. The animal and plant species of this region are as follows:

• the plant of halophyte

• wolf, fox, snake, and some birds such as the. Some rare birds among the Saltbushes have created a charming view of the desert nature in this region. The common birds of the Meighan Wetland are.

Due to the gathering of cranes in the Meighan Wetland, right on 15th of November, this very date is named Crane’s Day.

Placed in Arak City and expanding over 82.125 hectares area, this region includes a complex of heights, hills and plains with steppe coverage. Its mountainous regions have rare species of wild flora with their effective role in preserving soil texture and forming underground water. Haftad Stretching from a north to south direction with seventy peaks, this vicinity, due to special merits and abundance of a variety of wildlife has been considered as one of the oldest hunting regions of Iran, favored specially by Qajar kings. On 1970, it was named a hunting prohibited and protected area by the Department of the Environment declared.

This bath situated in Arak, consisted of two separate sections for ladies and gents, dates back to the Qajar period. The structure with tile works and the spinal designed columns, was renovated into a museum. This late Qajar Era’s structure, built by Haji Muhammad Ibrahim khansari, is the largest bathhouse in Iran. The drawings and paintings, this bath were decorated by, are the reason for its name. Four Seasons Bathroom is recorded in the National Heritage List.

Coinciding with the establishment of the city itself, this Seljuk-Era Monument was built in the 12th century (in Saveh). It comprises a courtyard, porch, a minaret, dome and two archaic altars with a few inscriptions in Kufic and Thuluth in some parts of the building. The mosque has a rectangular open court of 36×44 meters, surrounded by brick columns. The mosque, originally, had two minarets (14 X 3.5 meters) but only one of them remained standing. The superb, varied bands of raised brick patterns and the Kufic and Naskhi Scripts made this minaret the finest work of the Seljuk period.

Church of the Holy Sepulcher

This ruined church of the Qajar Period located in Arak, has been registered as one of the national monuments of Iran on March 1, 2006.Built in a large courtyard, it has four school buildings, a gathering hall, a parish house and a church. Moreover, on the southwest side of the courtyard, with installation of a large crucifix, they have commemorated the Armenian martyrs.

At Mountains Near the village of Qiz Qaleh, it was built 35 km southwest of Saveh. All around this castle, a few tunnels were constructed quite skillfully, as defense trenches; accompanied by a nearby water reservoir, embedded in a rock. Overlooking the Saveh Plain, the castle placed on a terrace carries a clear symmetrical layout. On each side, it includes a corridor and three chambers, all connected to a porch. Near the entrance of the main building, there is another structure specialized for worshiping; the altar of which is still notable in the southwestern sector. At the north of the castle the remnants of a village and hillock are seen, wherein the earthenware of the 5th and 4th BC discovered.