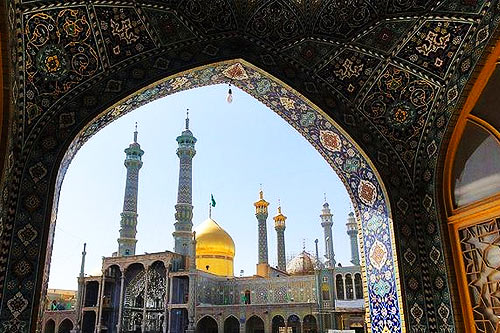 Pre-Islamic city of Qomishan, is one of the 31 provinces of Iran with 11,237 km² area, which covers 0.89% of the total area in Iran. With Qom City as its provincial capital, it was formed from part of Tehran Province in 1995.

With a various climate between desert and semi-desert condition, it comprises mountainous areas, foothills, and plains. Yet, due to being located near an arid region, it experiences a dry climate, with low humidity and low rainfall; due to which, agriculture is not possible here, especially around the salt lake. Qom province has two large salt lakes: Howz-e Soltan Lake (Qom North) and Namak Lake (Qom East).

Thanks to its theological center, the shrine of Hazrat-e Masoumeh and Jamkaran, today Qom is considered a major center of the Shia Branch of Islam. As Tehran’s facing an increasing probability of a major earthquake and is notorious for its pollution and traffic congestion, Qom has at times been considered as a possible candidate for substitution. Contrary to the business and economic base of Tehran, the conservative fractions are advocate to this idea.

In addition, to its important religious spots, Qom contains many attractive places as touristic ones; some of which, are as follows:

It is considered by Shia Muslims to be the second sacred city in Iran after Mashhad.Fatima Masoumeh was the sister of the eighth Imam, Reza, and the daughter of the seventh Imam, Musa al-Kazem. As a saint, every year, thousands of Shia Muslims travel to Qom to honor Fatima Masoumeh. Also buried within the shrine are three daughters of the ninth Shia Imam, Muhammad al-Taqi.

This is one of the primary significant mosques in Jamkaran Village, on the outskirts of the city of Qom.The mosque, six kilometers east of Qom, has long been a sacred place; since Hassan ibn Mosleh Jamkarani is reported to have met the twelfth imam and the prophet Al-Khizr, there.
Sometime in the decades of 1995-2005, the mosque’s reputation spread, and many pilgrims, particularly young people, began to come to it.

It is located six kilometers south of the city of Qom. At the top of this mountain was a cave which today has become a mosque because the holy prophet Elijah is said to come to this place. The Iranians also say that this place was often visited by the mystical cults of the dervishes. As well as being a religious spot, Mount Elijah is now a leisure place for citizens; as on holidays, large numbers of people climb it.

It was built next to the Fatima Masoumeh Shrine, by Sayyed Hossein Borujerdi, grand Shia Marjah; the construction of which, took place from 1954 to 1961.Built based on the Islamic architecture, this mosque contains four prayer halls and three towering balconies. The diameter of the large dome of the mosque is 30 meters with a height of 35 meters. A clock tower is also located on north of the mosque, seeable from all around.

Located in east of Qom, it is a small garden with three domes. Three relics are seen in the vicinity of the Baq-e-Gonbad Sabz (8th century AH), reputedly known as Darvazeh Kashan. According to inscriptions two of them are the tombs of ancient commanders from the Ali Safi household in the 8th century AH.

A protected ecological zone in north of Iran, with an area of 4,000 square kilometers. Siahkuh/ Black Mountain is a large, semi-circular rock outcropping sat in the park’s center.The park encompasses landscapes of desert and steppes, and sometimes known as “Little Africa” for its wildlife, including: native goats, sheep, striped hyenas, Indian wolves, gazelles, the rare Asiatic Cheetahs, and the Persian leopards. This area receives around 150 millimeters of annual rain, most of which falls between November and May; the vegetation of which is adapted to drought and salty soils. Namak/ Salt Lake sits immediately outside the park boundaries. This is actually a salt marsh; into which, water flows from the north via the Qom River (also flowing on north of Kavir National Park).

Hoz-e Sultan/ salt lake, built in 1883, has penetrated 5 layers apart from each other up to a depth of 42 m from the ground and captures 240 square kilometers. The saline layers are separated from clay soils with a brown to gray color.Some experts have considered this phenomenon as a wetland, and even the name is listed in the list of five lakes in Qom province, approved by the Ramsar Convention. On the other hand, at the site of the Sultan’s Pond, the water level is zero and so it can be considered as a super-glint spot. The level of static or piezometric is the highest level of groundwater and on a specific surface in the basement.Hoz-e Sultan, a lonely salt lake in the heart of Iran, is the center of relatively a rich fauna. Sprawled about 40 kilometers northward of the city of Qom and adjacent to the Qom – Tehran highway, it covers 37,075 hectares of lands with an altitude of about 720 meters above sea level. This lake is how away considered as one of the lowest parts of the Iranian plateau.
The region is a haven for some breeds of migratory birds, the majority of them come from the north Caspian countries. There can be found footprints of houbara, pigeon, grey goose, mallard, duck, ruddy shelduck, stork, flamingo, falconers, grey goose, stork and different kinds of eagles.
Mammals like rabbit, rat, fox and sometimes deer can be also spotted near the lake. According to researches, there are more than 240 species of valuable aerobic creatures such as algae, bacteria, and mushrooms here.

This is an old school in Iran, founded in Safavid Era and listed as one of Iran’s national monuments as of January 29, 2008; in which so many characteristics of clergymen were trained.