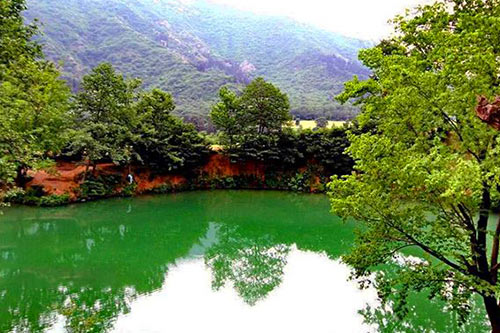 It is one of 31 provinces of Iran, with the centrality of Gorgan, located in the north-east of the country and south of Caspian Sea; the majority population of which, are Sunni Muslims.
Getting separated off from the province of Mazandaran (1997), by the year 2011 it had a population of 1.7 million (in an area of 20,380 km²). Shouldering a diversity, climatically and culturally, this seven-thousand-year old province is one of the significant regions of Iran.

Golestan Province enjoys a mild weather and climate, and geographically is divided into two sections: the plains, and the mountains of the Alborz range; with the highest point of 3,945 meters, related to Shavar. The other fabulous point of this province is its dense forests which are really well-known and popular among nature lovers. Some still remained untouched, these can provide the travelers with natural sceneries, incomparable with any other views.

This is one of the oldest and largest national parks in Iran, extended up to 3 provinces: Golestan, Mazandaran and North Khorasan. Thanks to its remarkable geographical location, the park widely bears unique climatic zones and ecosystems, ranging from humid to desert ones. That’s why many species of animals such as brown bear, wolf, jackal, red fox, wild cat and 150 types of birds have sheltered here.

As one of the most breathtaking landscapes, chosen by National Geographic, this mausoleum with a mysterious cemetery, is mounted on a peak, near Turkmenistan. According to locals, Khaled Nabi was a Pre-Islamic Prophet; whose cemetery itself is unique, with more than 600 standing stones spread out in several locations of the site. But what makes this site even more attractive, is the exceptional sceneries it provides.

AS the producer of more than 40% of Iranian caviar, this only island located in Iranian coast of Caspian Sea is reachable through Bandar-e Turkman. Almost vacant except for a few people, it is visited by thousands of travelers annually. The best creator of a beautiful scenery for this village is its old wooden bridge over the sea, that as a significant element of the island is constantly photographed of by the enthusiast tourists.

As one of 7 extraordinary natural tourist attractions of Iran, here some of the most breathtaking views of northern forests of Iran are gathered. Among all four seasons, especially Autumn Season demonstrates the park’s peak of beauties, by forming a collection of thousands of eye-catching colors. During the hottest days of the year, Alang Darreh, the home of many rivers and springs with a cool and mild climate, is the best promenade for those tired of big cities.

Located in a valley of massive forests, 3 kilometers south of Ali Abad-e Katul in Golestan, there is the largest moss-covered waterfall of Iran. With a height of about 6 meters, this amazing waterfall and nice attraction of the province, is fed by the nearby springs, with a water quite fresh, clear and drinkable. On the way to this rare unforgettable place, you also pass by other small and large waterfalls, each with its unique delightful view.

This untouched mountainous green village is surrounded in a vast plain between the Alborz mountains and Hyrcanian Forests. Aa the location is protected, so normally provides an extraordinary arena for tigers to live in freely. Thanks to its height, the area is known as the roof of Golestan Province; as its also renowned of its forests which are reputed of being among the oldest ones in the world.

The land of pristine plains, thanks to its status is the most famous spot located between Gonbad-e Kavus City and Golestan National Park. All of this place is covered by wild anemones during April and May; with Padoldol Plains as one of them which carries good reputation among nature enthusiasts. This fantastic land is also the home of the oldest human settlement in the north parts of Iran called Kiaram Cave. Each lover of nature here would be absorbed by the charms of the unique scenery created by the combination of red and green colors.

Founded in Qajar era, it was registered in the list of Iran’s national monuments on 10th of Bahman 1383. This antique palace contains various sections such as Dar al-Emareh House, Dar al-Hokumeh, Kolah Farangi House of Abbas Khani and Selsian Khani; each of which a great spot to be explored closely.

This historical and glorious construction in Gonbad-e Kabus Town, is located in a vast and beautiful park and carries a great potencial to attract the eyes of any observer even from far distance. The Tower is a valuable relic left from the Hijri Fourth Century which is a remnant of Ziyarid Dynasty. Having been registered in the 36th UNESCO Conference as a world heritage site, this structure used to be the guide and milestone of travelers who used to pass this land. It is not only the largest brick tower of Iran, but also one of the tallest ones of the world.

Thanks to tectonics layers and the existence of branches of Atrak River in the plain meadow of Turkman Sahra (northern border of Iran with Turkmenistan), a set of incredible ponds have been formed; including: Almagol, Alagol, Ajigol, Incheh, Daneshmand, Bibi Shirvan, Shour, …. All qualities of these fabulous phenomena would change in accord with the amount of water and annual dryness. According to the definition of Ramsar convention, despite being occasionally mentioned as lakes in geographical maps, due to the fact that their depth is lower than 6 meters, so are all considered as ponds.

Through attracting so many domestic and foreigner tourists every year, this very scenic spot is considered as a significant tourist attraction of Iran. Containing various species of birds, this very region is mostly famous for its pretty springs and specially the lovely Lowe Waterfall.