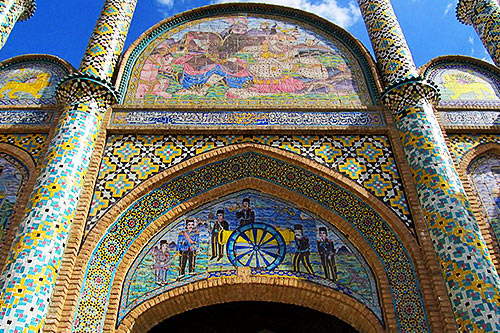 The capital city of Semnan Province, the city is located in south of Alborz mountain range and the north of Dasht-e Kavir, with dry, moderate climate, warm summers and cool winters. Language base of Semnan/ island of accents was derived from Pahlavi, the ancient language of Parthian.
This province covers an area of 96,816 square kilometers and stretch along the Alborz mountain range it borders to Dasht-e Kavir Desert in its southern parts.

Divided into two parts, it includes: the mountainous region and the plains at the foot of the mountains. The former as a source for minerals, also offers a scope for recreational activities, whereas the latter encompasses some ancient cities of Iran

Although not very famous, Semnan has many tourist attractions; from great nature of its colorful counties with various climates, to many attractive historical places of the city:

This 9th-AH bath, with beautiful transom, tiling, and the poems written in masterful clear Nastaliq Script on the entrance, is now a museum. established by the order of Khajeh Qias Al-Din Muhammad, one of Timurid’s Ministers, is located in the central part of Semnan; in which the corpse of a pregnant woman, from 4500 years ago is buried.

Undergone many changes, this is a valuable ancient monument. According to documents dating back to Century 3 AH, the structure was expanded in Seljuk, Ilkhanid, and Timurid periods. At northeast of the mosque, there is a minaret on whose brick body an inscription is written in Kufic Script.
This Azeri-Styled Mosque, was registered in the list of Iran’s National Heritage in 1931. Due to the minaret’s importance, it has been registered under a separate registration number.

Built at the time of Bahman Mirza Baha al-Dowleh (son of Fathali Shah Qajar), this beautiful work is the northern gate and the only remainder part of Semnan Arg. The most important feature of the monument is the historical painting of the battle of Rostam and the White Beast on the seven-colored tiles of the entrance portal.

One of the remnants of Qajar dynasty, it dates back to around two centuries ago. This complex consists of three main parts: The Northern Bazaar, The Southern Bazaar, and Sheikh Ala’oddoleh Bazaar, which at inside includes the tourist attractions of Jame Mosque, Tekyeh Nasar, Tekyeh Pahneh, and Garmabeh Pahneh.

A historical village located near Semnan; due to the location of which, it is staired-form; like what is seen many northern cities of Iran. It is adjacent with Turan Protected Area; in which rare animals make this desert scenery into a charming location.

One of the least-explored deserts in Iran, which is located in the west and southwest of Dasht-e Kavir. This desert’s 3800-square-kilometer area, actually consist of sand dunes with steep slopes on the eastern side and gentle ones on the western part. Sinking in mud is one of the most dangerous events that may endanger visitors and drive them to the jaws of death. That’s why, for many years, nobody has dared to travel to the heart of Rig-e Jenn, even the geologists.

Located between Jame’ Mosque and Imamzadeh Yahya in Semnan, it was constructed in 856 AH, by Teimoorid Monarch. The structure comprises of three sections: cloak-room, garm khaneh and the pool of hot water/ khazineh. The doorway of bath, covered by tile works, has been beautifully adorned with a poetical inscription in Nastaliq Script. After suitable renovations, in the year 1994, this same place was introduced as the Museum of Anthropology by the Cultural Heritage Organization.

Located in the vicinity of Mehdi Shahr, 21 km north west of Semnan, these springs contain calcium sulphate, useful in the treatment of liver and kidney.

As the continuation of the mountainous forests of the Alborz mountains, these natural forests are located in the northern parts:
• the juniper forests of tall and dense trees, on the southern skirts of the Alborz range
• the desert forests of tamarisk trees, on the vicinity of Chah Jam and Khar Tooran
• the artificial forests of city parks family
Moreover, about 160 km of the entrance and exit routes of the province have also been manually planted.
The major portion of Semnan province is desert, like:
• The Kahak Desert, south of Garmsar
• The Haj Ali Qoli Desert, south of Damqan
Nasar/ Nohesar Archaeological Hill
Laying at 3 km east of Semnan city, in a huge mound in the north east of the current Nasar. Apparently, the former city demolished in invasions, and the present village of Nasar was founded on remnant ruins.

These reservoirs were built to keep the ice of Winters in, as a good resource for hot summer days. In Iran these structures are seen in abundance, like the ice houses of Semnan: Atashgah, Biabanak (in Biabanak Village), Khazaneh (in Garmeh Village), Mian Abad Village (in Shahrood), Mazaj Ice-Pit, Abbas Abad Village, Shasefeed Village (Garmsar), Kardovan Village (Garmsar), and Sorkheh.

This monument built of a mixture of gypsum and mortar, besides brick and stone, is located in the village of Lasjerd, Semnan. The remained structure from Safavid Era, contains two porches and a large courtyard with 24 rooms or chambers around. The ceilings of the porches are intricately designed and arched/ barrel- shaped. This structure has four entrances which connect the courtyard to the corridor, all with arched ceilings; at opposite side of which, the halting places were placed.

Constructed during the reign of Shah Soleiman Safavid (1097 AH), it is located in the village of Ahovan, on the route to Mashhad; in the rooms of which pilgrims used to settle for short times (24 rooms built around the rectangular courtyard).