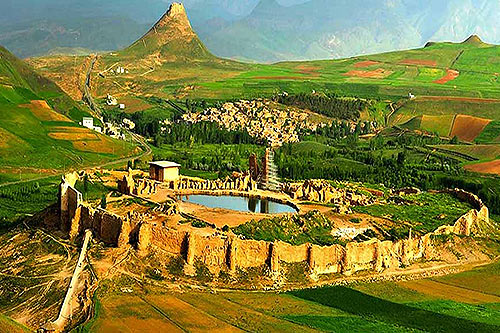 Zanjan, the capital of Zanjan Province, located about 20 kilometers south of the Qaflan Kuh Mountain, is placed 298 km north-west of Tehran. By 21733 square kilometers area, it is the 20th largest city in Iran with 521,302 population (by 2016 census); of which, mostly are Azeri People with Azerbaijani as their language. Zanjan is the happiest city among the other provinces; whose many villagers are traditional carpet weavers, as its best popular handcraft. The city is also known for its beautiful handcrafts such as knives, traditional sandals/ charoogh.

Zanjan with its renowned beautiful nature, has a cold semi-arid climate with hot dry summers and cold moist winters, often with snowfall. Precipitation is very low that mostly falls between October and May.

In addition to its pretty nature with so many spectacular spots, Zanjan is also the home of dozens of historic monuments; among which, just some are introduced here:

Located in the ancient part of the city, it consists of two sections:
• Bazaar-e-Bala/ upper section
• Bazaar-e-Paieen/ lower section
The former consists of the Qeysarieh Bazaars and the bazaars of Hojjat-al Islam, Imam Zadeh and Abdul Ali Beige Bazaar, whereas the latter today is used as a warehouse, consisting of: two caravansaries/ local ancient inns, two mosques and two public baths.
Zanjan Bazaar has been divided into eight different segments, each specified to a guild: jewel merchants, foot ware, hat ware, textiles, saddle-makers, fruit sellers, …

Constructed during the Qajar-era (1826), it contains four ivans on the sides of a large open courtyard; to the east and west of which, sixteen chambers exist parallel to each other. Most chambers That are residential rooms for theology students, facing towards south encompass arched ceilings decorated by artistic tile works.

This historical complex is located in the central old part of the Zanjan City, comprising of:
• The interior section that mainly was the domain of women.
• The exterior section; of which, only the central portion is remained.
This two-storey structure has two staircases leading to the upper floor with halls, drawing and bedrooms. The major point of architecture here is the dome in the central part of the ceiling known as Chahar Taqi. Moreover, this structure is also ornated by a spectacular octagonal center, well known as Kolah Farangi/ pavilion. From 2009, this building has been holding six naturally preserved human remains called saltmen/ namaki, discovered in 1993 in the Chehr Abad Salt Mines (from Achaemenid Era). Zolfaqari Mansion was registered as a National Heritage Site in 1996.

Though initially the old building was constructed as a caravanserai (200 years ago), afterward, for almost 80 years it was the house of one of Zanjan’s scholar, Sheikh Jalal Ashabi.Then from 1997, it had been uninhabited for 20 years but ultimately in 2017 was renovated and now serves as a traditional hotel.

This Safavid-Era-made complex is an ancient roadside inn, finally converted into a restaurant in the 1990s. This stone single-storey building with four ivans/ porches and an arcuate ceiling, is the oldest monument in Zanjan. All its rooms and sections are gathered under an arcuate ceiling. Using of stone as the main material in the building, has caused the it to be reputed as Stone Caravanserai.
Sangi Caravanserai was registered in national index in 1998 by the Iranian Cultural Heritage Organization.

Currently historical anthropological museum of Zanjan, at the past years used to be a wash-house (20th-century-made). The reason for building Rakhtshooy Khaneh (by city mayor) was for women to have a comfortable and safe covered place to wash loads of clothes and other stuffs; which in whole Iran, it is something really unique.

Constructed during the reign of Soltan Mohammad Khoda Bandeh (704-712 AH), it lies south west of the Cohan Dej/ Royal Citadel. This 50-sq. m structure has 8 elevated porticos and about 50 chambers in three floors, with a column-topped dome weighing 200 tons.
The artistic effects of this complex are the inlayed brick-work, tile works, plaster moldings and engravings; like what is seen as a pretty engraving with 360 cm high, that shows a verse from the Holy Qoran in Tholth Script.

Locating 140 km south west of Zanjan, in the southern skirts of the Saqizloo Mountains, its inlet stands 6-8 m above ground. Whole beauties of this cave are owed to the stalactites and stalagmites shapes and all of which formed by precipitation of the site. Besides, the candles born of the multicolored impurities, along with some of them that are so crystal clear, are suspending from the ceiling and bring forth a unique scene. The beauties here are not summarized to these, as in the larger passages, the constant presence of water has brought about the beautiful designs and notable shapes similar to a cauliflower that are multi-colored.Also, on this cave flooring a skeleton of a four-legged animal can be noted, which has been converted to a calcified compound.

Originating from Chaman Soltanieh and the Aq Daq Mountains, it flows through a part of the domains of Zanjan and the territory of Chaipareh, together with smaller rivers that finally join the Qezel Ozan River near Rejeen. Throughout its route, also other leisure spots have been emerged like gardens, greeneries and natural beauties.

It’s rooted from the mountains of Kurdistan, and flowing through the Winter Residence Sites/ Qishlaq of Afshar Terrain, then goes on to the suburbs of Khoda Bandeh. Ghezel Ozan forms a part of two rivers that joining each other form the Sefid Rood River, and flow towards east, between the mountains of Tallish and the mountain ranges of north Zanjan. Near Manjeel it joins Shahrud’s Hezar Rood/ Sefid Rood, then proceeding northward, ultimately pours into the Sea of Mazandaran. The banks of the Qezel Ozan River, a rare wonderful site, is one of the remarkable leisure spots in Zanjan Province.