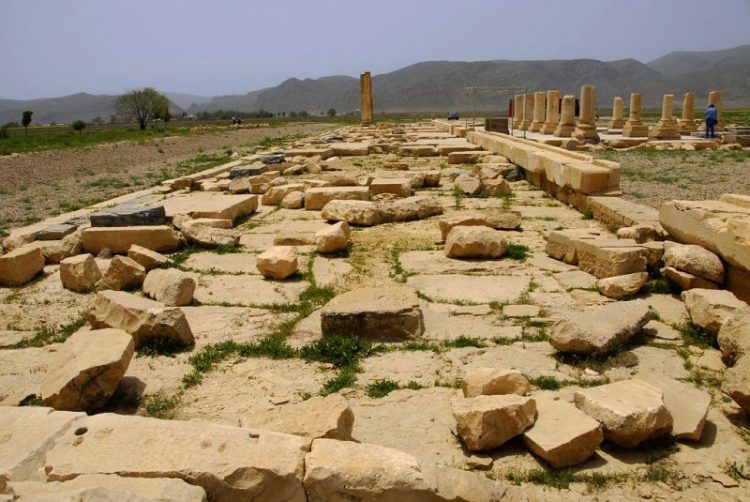 The Persian garden at Pasargadae was a large formal garden with stone water channels and orchards. Built during the reign of Cyrus the Great (550-530 BC), Pasargadae’s garden is one of the earliest built gardens for which we have evidences. Its location and layout-a lush walled garden in an arid countryside is believed to represent the Islamic and Judeo-Christian ideals of paradise on earth.

Archaeological evidence-the gardens were excavated by David Stronach in the 1970s-suggests that Pasargadae’s palaces were structured to provide private access to the gardens. Pavilions, channels, orchards, pools, terraces, walkways and an enclosing wall characterized the garden, which was laid out symmetrically in a four-part system. The fourfold garden is thought to have symbolized the Achaemenid universe of four quarters divided by four rivers: a central pool in the garden led off in channels in four separate directions.

Historical reports of the period describe Persian gardens in several Achaemenid dynasty capitals, including Persepolis and Susa in Iran; Sardis in Lydia (now Turkey), Celaenae in Phyrgia and Belesys in Syria. The gardens were described to having exotic animals and plants used for medicines and perfumes, including tamarisk, oleander, roses and violets.

Other Mediterranean cultures in contact with the Achaemenid soon adopted the garden notion. The Pasargadae Garden and similar gardens in other Achaemenid cities are believed to be the model for the gardens of paradise in both Islamic and Judeo-Christian belief systems. The word for the enclosure-pairadaeza-is the basis for our word ‘paradise’, and the gardens are believed to have been the pattern for the celestial garden described in the Koran, and the model for the Biblical Garden of Eden.