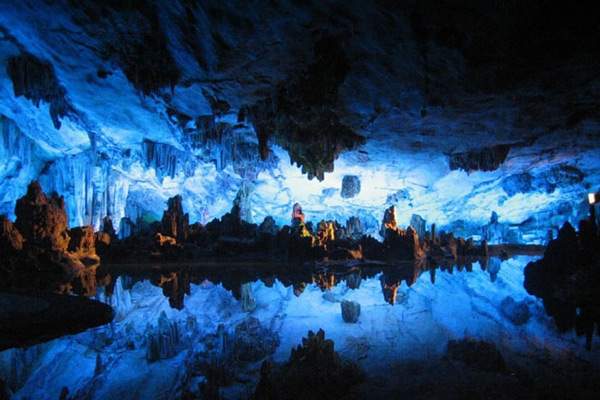 Background
The sunless grottoes feature clear waters, fantastical rock formations, and stalactite-covered ceilings soaring high overhead, since its formation millions of years ago is up to now standing highest among other caves of the world.
Ali Sadr Water Cave is 190 million years old and still alive. According to geologists, a cave is alive and changing as long as there is a sound of water leaking in it.
Name of the city Hamedan is paralleled to the famous Ali Sadr cave; the most famous and popular attraction of the city and the biggest water cave in the world, which like any other spots carries a story on behind: a shepherd, Ali Sad, seeking water or maybe his lost sheep, explored this place which resulted later on in being registered as Ali Sadr in the governmental offices. Now as the most famous water cave of the world, each year a great deal of visitors from inside and outside of the country come to this outstanding place to experience the amazing spring and summer of it: for, another feature of the cave is its clean and fresh air without any sorts of pollution or dust, with a low temperature in summer and mild in winter. The air in the cave is too extremely light, that if you light a candle, the flame would stand still and without any movement.

The drastic difference between the temperature inside and out of the cave has made it a pleasant destination for the tourists. Ali Sadr Water Cave is the masterpiece of Mother Nature as it throughout the past decades has attracted numerous visitors, lonely.
All in all, in Ali Sadr Cave, everything is amazing: from the walls and ceilings, to the deep bright lake under your boat; briefly, each and every single scene of which, fetch you to another era.
Features
Ali Sadr Water cave is located in Kaboudar Ahang town(province of Hamedan, by a distance of 59 kilometers from the city), in the southern part of Ali Sadr village. The cave, placed on the Sariqieh heights, including two other caves called Sarab and Soubashi, used to have a very narrow entrance; through which, no one but the professional mountain climbers could pass. Though, after a while, Abdollah Hajilou, assisted by local people, made the entrance a lot bigger and these days it is about 5 meters wide and 3 meters height. Little by little, using concretes, it turned to be an appropriate place for walking in and after getting equipped, also possible for public visiting.
The main chamber of the cave is 100 by 50 meters and height of 40 meters. The walls with this sound height usefully help the cave to contain several large, deep lakes. Unlike other water caves around the world, this Cave has wide water channels which make the accessibility to the depth of the cave easy. The most attractive part of which, is its wide lake that makes boating through the deeper parts possible.

Cave Ali Sadr colorless water is odorless and has natural taste, with no living creatures in it and a temperature of 12 degrees centigrade. With approximately the same chemical composition in different parts, this water is considered as light calcic bicarbonate with nearly neutral pH (acidity) and not drinkable
The water with average depth of 14 meters in different parts, stemming from rainfalls, underground springs and outflows from the walls and cave ceiling, best form the route for the touring done by boat. As the excess water of the cave flows out in the form of fountains (like Cheshmeh Shoor), the amount of water flowing into the cave is stable, but when there is shortage of water, the impact of its fluctuations is evident on the cave walls.
Colorful, glittering geological structures cover the tunnel walls above and below the surface of the water, which due to its high clearness, up to a depth of five meters they are visible. Visitors to Ali Sadr Water |Cave are conducted to an underground wharf where they are boarded on boats to glide silently through this chain of flooded chambers. The standard tour takes visitors on a 2100-meter journey through Ali Sadr Cave, 1470 meters of which is covered by boat—making it one of the longest underground boat trips in the world. Though you’ll be traversing the cave mostly by boat, there is quite a bit of walking, through the stairs. Total tour takes about 2-3 hours depending on whether you choose the “old” path or “new” one.

Corridors and labyrinths of the cave are no less than the streets and alleys of a city. Some of them lead you to a dead end while some others are interconnected. These tight, winding passageways, branch off endlessly from one another, or open up into massive rooms like the Wedding Room (also called the 1000 Stalactites Room), the Island (which sits at the center of the complex), and the 600-meter-long Freedom Hall (the largest chamber in the network).
So far, 14 kilometers of the Ali Sadr Water cave canals have been explored, but only some four kilometers have been illuminated and ready to use. After looking at the stalactites, the great stalactites, the third and fourth islands, boating, cave climbing, passing through water paths and crystalline ceiling chambers, one believes that this phenomenon is one of the most marvels of the world, inexpressible to state all its glory and beauty.

Geologists believe that the rocks of this mountain pertain to the second geological period i.e. Jurassic (190-130 million years ago). Anyway, the excavations and archeological studies of Ali Sadr Water cave have led to the discovery of ancient artworks, jugs and pitchers dating back to 12,000 years ago. Animals, hunting scenes and bows and arrows depicted on the walls and passages of the exit section, suggest that primitive man used the cave as their abode. The cave was known since the reign of Darius I (521-485 BC), verified by an old inscription at the entrance of the tunnel. However, the knowledge of the existence of the cave was lost and it was only rediscovered in 1963 by Iranian mountaineers. Since then it has been explored by mountaineers and geologists from both Iran and abroad and since 1975 the cave was actually opened to visitors.