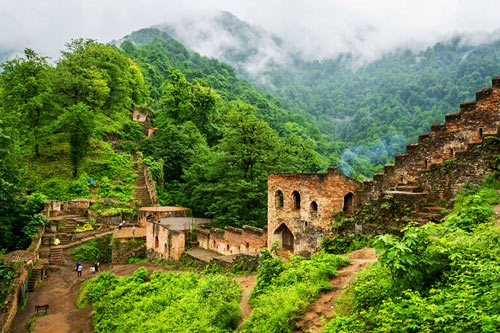 The capital city of Gilan Province, also known as the “City of Rain”, had a population of 639,951 according to 24 October 2011 census. This largest city of Iran’s Caspian Sea Coast, is a major trade center between Caucasia, Russia and Iran, using the port of Bandar-e Anzali. Rasht is also a major tourist center with the resort of Masouleh in adjacent mountains and the beaches of Caspian Sea as some of the major attractions.Historically, Rasht was a major transport and business center which connected Iran to Russia and Europe; that’s why it was also known as the “Gate of Europe”. The city has a history that goes back to the 13th century, though its modern history starts from the Safavid era during which Rasht was a major silk trade center.

On its ups and downs of the history, Rasht has seen the Sassanid era, the armies of Peter the Great and later Russian rulers, and British colonialism. The people of Rasht also had a key role on Iran Constitutional Revolution.Along with regions around Tabriz and Tehran, Rasht has had prominently one of the earliest industry bases from the last quarter of the 19th century on, in the fields such as fishing, caviar production and in the Caspian Sea oil pipeline construction and textiles. Until the mid-70s, Gilan and Rasht regions were the third-ranking industrial cities in Iran by number of workers and per capital productivity. Though after the 1970s, it lost its cultural and industrial status to a large extent.Rasht is also the birthplace of Mirza Kauchak Khan, one of the leading figures of the Constitutional Revolution; whose movement in Gilan, under the name of Jangalis, represented a pro-modern and social democratic program for reformation of Muslim Rituals and Traditions.

Depending on the precipitation threshold, Rasht/ The City of Rain either has humid subtropical climate or a Mediterranean climate, with warm summers and cool winters. Despite its marine position, it is also relatively continental with cooler winters and a higher seasonal temperature variation than in much of Iran. Rasht with average 81.2% humidity, is heavily in contrast to the cities in many other parts of Iran. Compared to most places with same latitude, its sunshine hours, averaging roughly 1,520 per year, are lower than in most parts of Iran. The summers of Rasht are warm, muggy, dry, and clear, and the winters long, cold, and partly cloudy; Over the course of the year, typically the temperature varies from 36°F to 87°F.

All the Firsts of Rasht

As it is a habit for all hospitable Iranian, Rasht too, in a quite natural green bed welcomes warmly all its visitors, whether from inside or outside the country. This city quite honestly provides its guests with different beauties and charms:

It is 18 km south of Rasht (2 km off the Qazvin highway), with local crafts displayed, including: mat-making and cloth-weaving.

Located in Gilan province, north of Iran, 15 km south of Rasht, the water of this lake is supplied by the Spring Fountains of the region. Around the tomb of Agha Seyyed Sharif, there are many lakes with magnificent nature; one of the largest of which is the Saqalaksar Lake/ Dam, located near Chomacha and the village of Saqalaksar. The water of this Lake is provided by rainfalls and Saran Spring. With a height of 64 meters, the length and width of it are respectively about 600 and 500 meters. The term “Saqalaksar” means the place where birds drink water.

The oldest park of the city, built during the reign of Nasser al-Din Shah that today it is the main park of Rasht. Its planting of trees, the street plotting and the construction of the summer mansion (the mansion) have all been carried out under the supervision of Akbar Khan Biglar Beygi, the owner and main sponsor of the park.In a section pf the park, there’s a mansion (Kolah Farangi/ Pavilion) with 4 floors; though from the outside it seems to have only 3 floors. The mansion with an octagonal-shaped top floor (and a few windows) has been registered in the list of national monuments of Iran on November 5.

This park as one of the oldest gardens in Rasht, is also called the Black Garden, with its sprawling trees indicating the site’s antiquity. This old space, beside a pretty greenery and a natural pond, provides its visitors with various facilities such as: football, volleyball, basketball, tennis table and musical fountains.

One of the oldest markets in Rasht, it is located in the center of the city, with an area of over 5 hectares. The market includes a large square, a small square and a caravan; all, with an architecture serving as one of the tourist attractions of the city. There are four inns in this market built during the Qajar and early Pahlavi dynasties, known as trade centers of the region.

An old square in Rasht, near the municipality square, which in the past as a greenery extended up to the neighborhood of Chamarsra. During the reign of Muzaffar al-Din Shah, Mohammad Vali Khan Tonekaboni was appointed as the governor of Rasht to maintain and expand it. At that time, this garden square was surrounded by several streets and schools.