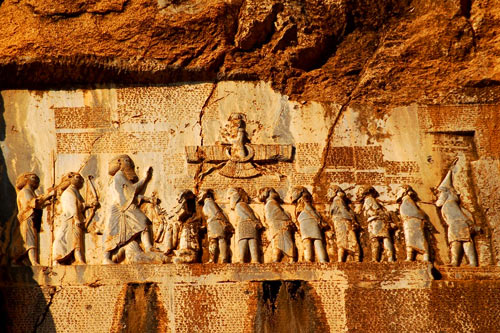 One of the 31 provinces of Iran, known from 1969 to 1986 as Kermanshahan and from 1986 to 1995 as Bakhtaran. This city is the center of Region 4, with the region’s central secretariat located in it. A majority of people in Kermanshah Province are Shia, while there are Sunni and Yarsanist minority groups, as well.

In related documents, the mythical ruler of the Pishdadian is described as founder this city while Tahmores Divband built it. Anyway, the province has a rich Paleolithic heritage; as, many caves with Paleolithic Remains have been surveyed or excavated there, with some of them located in Bisotun and also north of Kermanshah; as, the first known physical remains of Neanderthal man in Iran was discovered in Bisotun Cave. Kermanshah also has many Neolithic sites, of which the most famous are Ganj Darreh, Sarab, and Asiab. In May 2009, based on a research conducted by the University of Hamedan and UCL, the head of Archeology Research Center of Iran’s Cultural Heritage and Tourism Organization announced that the oldest prehistoric village in the Middle East dating back to 9800 B.C., was discovered in Sahneh, west of Kermanshah. Kermanshah reached a peak during the reign of Hormizd IV and Khosrau I of Sassanids, before being demoted to a secondary royal residence.
The city suffered major damages during the Arab invasions but recovered in the Safavid period to make great progress. Concurrent with the Afghan attack and the fall of Isfahan, Kermanshah was almost completely destroyed by the Ottoman invasion.During the Iran–Iraq War, too, the province suffered of heavy fighting. Most towns and cities were badly damaged and some like Sar-e Pol-e Zahab and Qhasr-e-Shirin were almost completely destroyed.

Situated between two cold and warm regions, it enjoys a moderate and mountainous climate. It’s rainy mostly in winter and is moderately warm in summer. The annual rainfall of Kermanshah is 500 mm and the average temperature in the hottest months is above 22 °C.

To get familiar with some of the worthful sites of this historical city, continue reading with us:

Darius the Great’s inscription at Bisotun, dating back to 522 BCE, lies some 1300 meters high in the mountains, and counts as one of the most famous sites in Near Eastern Archeology. A UNESCO World Heritage Site, it has been attracting visitors for centuries. Bisotun is also notable for three reliefs at the foot of the hill that date from the Parthian era. Among them is a Hellenistic-era depiction of the divinity Bahram as the Greek hero Hercules, who reclines with a goblet in his hand, a club at his feet and a lion-skin beneath him. Laying on the route of an ancient highway, this life-size rock sculpture may reflect Bahram’s status as divine patron of travelers.

The rock reliefs at Taq-e Bostan lay 6 kilometers (4 mi) northeast of Kermanshah, where a spring gushes from a mountain cliff and empties into a large reflecting pool. The more impressive relief, inside the largest grotto (ivan), is the oversized depiction of Sassanid king Khosrow II (591–628 CE), who appears mounted on his favorite Shabdiz, arrayed in full battle armor.There are two hunting scenes on complementary sides of the ivan; one of which, depicts an imperial boar hunt and the other depicting the king chasing the deer. Elephants flush out the boar from a marshy lake for the king who stands poised with bow and arrow in hand while serenaded by female musicians following him in other boats. The Taq-e Bostan reliefs are not limited to the Sassanid era. An upper relief depicts the 19th century Qajar king Fath-Ali shah holding court.

It is the site of the archaeological remains of a vast Hellenic-style edifice on a raised platform. The remnants at the site dates back to early Sassanid times, while the platform of the complex may be several centuries older. In additional to the archaeological findings, this is the association with the divinity of fertility, healing and wisdom that has made the site a popular tourist attraction.

This is the name of one of two archaeological sites in Iran, that usually is thought to have been attributed to the ancient deity Anahita. The larger and more widely known of the two is located at Kangavar in Kermanshah Province and the other at Bishapur city.The remnants at Kangavar reveal an edifice that is Hellenistic in character, and yet display Persian architectural designs. The plinth’s huge dimensions for example, measuring just over 200m on a side, and its megalithic foundations echoing Achaemenid stone platforms, constitute exactly the “Persian elements”. This is assumed to be verified by the “two lateral stairways that ascending the massive stone platform recall the Achaemenid traditions”, especially that of the Apadana Palace at Persepolis.

Built by a couple of Sunni benefactors, the mosque is seemingly somehow inspired by Turkish styles in mosques. This project that was launched in 1945, due to its religious charming has an adorable status in the country.The beautiful mosque highlights elegant architecture typical of Islamic mosques; with the intricate arches and pillars catching the eyes at first sight.The mosque with finely-built minarets, also is decorated with delicate stucco works embellished with verses of the holy Quran. The arched windows from all over the bright main quarter, where prayers are held, during the day let the sunlight in.

A village in Sirvan Rural District, of Kermanshah Province, that has a population of 603 people, in 163 families(the 2006 census). This village is in a district called “Haw Raman” laying within the mountains of Shaho; in which the tomb of Koze Hajij is placed. The language spoken by the native people is also a variant of Kurdish called Hew Rami. There is a nice spring about 2 kilometers away from the village called Kani Bil or Bil Spring which is the largest one of the region.