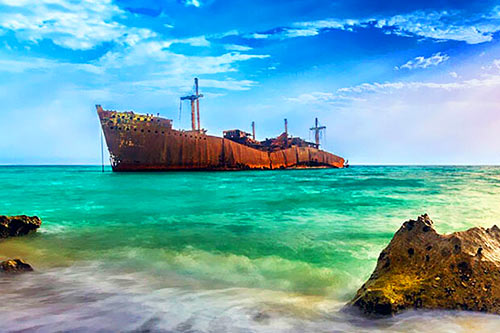 A pretty coastal city and capital of Kish District, that according to the 2006 census, its population was 20,667, in 6,163 families. As a special zone of Iran, this island served by Kish International Airport separate from the Iranian mainland, has a visa policy so that foreign tourists can take a visa upon arrival.Located on the north east of the Persian Khalij-e Fars, Kish is a free trade zone.
With an area of 90 square km (36 sq. miles), it is known for being a beautiful resort in the Middle East and the Persian Gulf, and so often referred to as Pearl of the Persian Gulf.

The island of Kish, a 91.5-square-kilometre (35.3 sq. mi) resort island in Persian Gulf, is Iran’s first Free Trade-Industrial Zone. Only 240km from Dubai, it is one of the nearest visa free zone exits from the United Arab Emirates, and thus very popular for in respect to daily or weekend trips.
To all other traits of this potent Island it should be added that beneath its toll free shops, it encompasses numerous archaeological sites.

Once the hub of exchanges between China, Europe and northern Africa and one of the main commercial bed of the time, this very Island was so prosperous. In spite the shortage of archaeological excavations carried out here, yet the existent signs of the past in each and every corner, demonstrate the glory of the time.Taking each step on this spot, will bring one across a new attraction. The beautiful shores by its untouched nature and the very beautiful vegetation create a floating demo of dancing colors against the azure tablet of the Persian Gulf; by which, any earnest heart would be absorbed. By the way, let’s go through certain attractions which tourists prefer to visit:

Restored by its form of the past, this old water reservoir is now one of the best attractions of the Island; the age of which goes back to over 2000 years ago. Once it was renovated and its floor carpeted with corals; resulting in a new attraction site for all visitors’ zest eyes. In Farsi, Payab means bottom of the sea.

Once playing the role of collecting water from interconnected wells in an area of 14 km², this structure worked by the use of differential pressure principle; in which, water from the wells was raised from the water table and conducted to a central filter shaft. The shaft contained three layers of filter material, with the top layer made of coral gravel (for neutralizing the water’s acids and filtering the bigger solids), the second one made of coral grit with clay (for filtering the finer solids) and the last part consisted of a special clay/ marl (for filtering the finest solids). Each one of filtered waters out of the different layers, would be suitable for different usages; with the best quality of water found at the bottom, that was the best qualified one for drinking and agricultural goals. Moreover, there were also underground canals specialized for another purpose: allowing the small boats to enter at the lowest level to collect drinking water from.

During some excavation, the found artifacts verified the year of this spot establishment around AD 1000. With a 120 -hectare land, its residents’ main profession was fishing and pearl diving., This splendid archaeological site showing the remnants of a large house with private qanat, a public hammam and a congregational mosque, around the year 1600 was abandoned. Some cues across the road, like an access stair cut into the rocky cliff, as well as rock-cut wells and channels that were part of the workshops producing date nectar, are all the best proof to verify that Harireh was originally positioned next to a busy commercial port.

This is an aquarium with a capacity of 20 thousand liters of fresh water fish; in which there are nearly seventy kinds of decorative fish, rare in shape and natural in color, scales and appearance. Yet, in some parts there are other unique complexes with so many salty and fresh water fish, and various kinds of reptiles such as snakes and alligators.

This known area as the Portuguese Valley at north part of the island, with a quite green atmosphere, houses the location of the Green Tree Complex that was built around one of the oldest lur (banyan) trees. With around a 600-year old age, as it’s said this an auspicious tree that help people with their wishes to come true; here, seeing that every now and then some gathering around the tree are tying a thread to the thick twisted branches, is not a kind of shocking thing!

Making a fantastic and marvelous area for the tourists, this zoo provided a nice home for many wild Animals such as Deers, Lions, Beers, Foxes, Wolves and Monkeys. Domestic animals (including Goats and Sheep) and birds (including Ducks and Swans) are also found here; just to make here more unique and unforgettable.Among this pretty collection, deer are the only ones that are free; watching their free movement around the garden provides the visitors with a great experience, rarely seen elsewhere.

In recent years this ship has been the major tourist attraction of the spot: a historic and famous old ship that silently sat on one of the shores is resting. It provides a beautiful scenic space; into which you can bring food for a picnic and while sitting in a shaded area, enjoy your moments.

Marjan/ Coral Park, located near Marjan Bazaar, is one of the most spectacular centers of Kish, which beautifully connects Marjan Bazaar to the beach with a water so blue and clear that any moving creature can be seen in its lower depths. Thanks to current of gulf’s water, many of the pretty creatures like corals, different snails, colorful oyster shells, and sea stones frequently are brought to the coast, making the face of the shore even more pleasant.

This is a spot wherein a nice collection of dolphins and other sea mammals has been formed; on which you can have a close exploration over these pretty creatures.

Apart from snorkeling on the beaches of Kish Island (as one of the best ones in the world), and scuba-diving which offers a rare spectacular view over the marine world, there are a variety of other water sports available: from jet-skiing, fishing, sailing, parasailing, water-skiing, to reef walking and coral viewing. These fantastic experiences are gathered in the Island of Kish; which is one of the least dangerous coasts of the world. For the female tourists of the Island, the women-specific beaches are also available.