Persian Pottery is one of the oldest Persian art forms. Islamic pottery is divided into two various groups Balta and Glaze. Potters use different methods including Geometric, Kofi’s writing etc. The “Animal Style “which was big in the Persian culture first appeared in the pottery. A Geometric pattern is one that is made up of regular lines and repeated shapes .Shapes can be rotated in order to create another pattern. Ideal Geometric in pottery indicates the desire of humans for achieving the idealistic world which is not existent in real life. Islamic Artists of this art make deliberate mistakes in their patterns in order to indicate that they are not as perfect as God .Throughout Persian history an especially intimate relation has always existed between art and spiritual discipline of the dominant religion of day .For this reason, it is sometimes difficult in Persian culture to distinguish sacred art from traditional art of which it forms apart. Beauty and symmetry have acquired different forms and increasing intricacies throughout the time, as there are numerous examples of them in paintings, sculptures, the architecture of temples and many more. 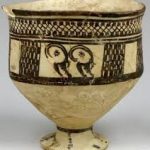 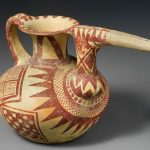 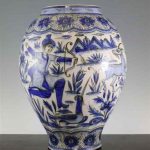 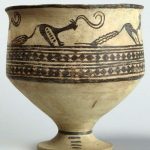 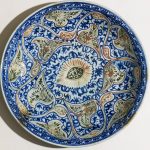 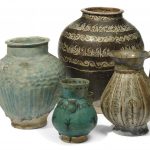